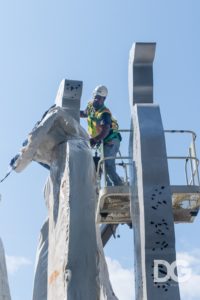 The Breaking the Bronze Ceiling statue arrived in Lexington, KY on Thursday, August 6, and has been installed at the corner of Vine and Mill streets.

“We are so pleased to serve in this capacity,” said Blue Grass Community Foundation President/CEO Lisa Adkins. “Creating a more vibrant and engaged city is central to our mission, and that’s what these projects add to our community.” 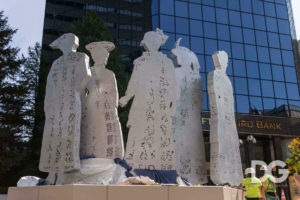 The statue was created by Arizona artist Barbara Grygutis, commemorating the 100th anniversary of the passage of the 19th amendment, giving women the right to vote. The statue consists of five 20ft tall metal figures of suffragists, which will light up.

An official unveiling and dedication of the statues will be held on August 18, marking the 100th anniversary of the passage of the 19th Amendment.